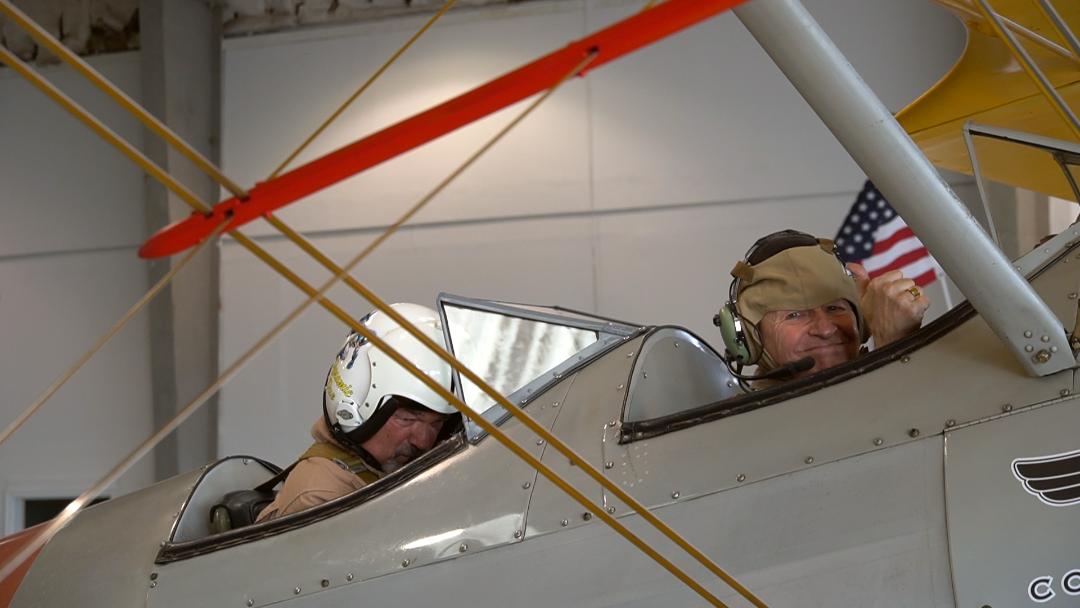 The Archbishop’s flight was at 10:00am followed by Rabi Alexis Erdheim’s flight at noon. The Archbishop had recovered from the Corona Virus just days before.

The Big Easy Wing limited the flight crew team, pilots, and photographers to ten people to maintain social distancing in the hanger.

New Orleans is 35% Catholic with over 100 parishes and churches. During the period of the Corona Virus-19 pandemic social distancing is being practiced and thus the churches are closed.

Pilot Jim Helms installed a Go-pro to video the flight as Archbishop Aymond blessed the city with Holy Water from the River Jordon, where Jesus Christ was baptized.

The Archbishop prayed for all government leaders, first responders, and care givers.

Following the Archbishop’s flight, Rabi Alex Erdheim did a spiritual flight to bless New Orleans. The Big Easy Wing is a Unit of the Commemorative Air Force and was founded in 2017. The CAF was founded in the 1950 and has over 150 planes in its flying museum.

The event was arranged by BEW Commander David Capo who titled the concept “Spirit Flights” and stated: “People could just come out of their houses and get a blessing from the air.”

New Orleans’ high percent of Catholics is due to several reasons. One is the 1885-1915 migration of over 60,000 Sicilians to work on the river plantations, the shipping docks at the port of New Orleans, and build the railroads of the south.

Sicilians are a spiritual group known for the annual celebrations around St. Joseph’s Day to whom they prayed to end a multi-year draught. The tradition is marked in New Orleans with altars to feed the poor and celebrations of thanks for the blessing Sicilians enjoy.

St. Rosalia  is the patron saint of Palermo in Italy, and three towns in  Venezuela. She is especially important internationally as a saint invoked in times of plague. Today she is being invoked by the citizens of Palermo to protect the city from Covid-19.

In 1624, a plague beset Palermo. During this hardship Saint Rosalia appeared first to a sick woman, then to a hunter, to whom she indicated where her remains were to be found. She ordered him to bring her bones to Palermo and have them carried in procession through the city. An annual procession for St. Rosalia is held in Kenner Louisiana, a neighboring town of New Orleans on her July 14th Feast Day.

The hunter climbed the mountain and found her bones in the cave as described. He did what she had asked in the apparition. After her remains were carried around the city three times, the plague ceased. After this Saint Rosalia was venerated as the patron saint of Palermo, and a sanctuary was built in the cave where her remains were discovered

The Big Easy Wing invited AWE.News exclusively to be inside the hanger due to a limit of 10 individuals. Joey Harmon and Charles Marsala of AWE News filmed and posted on their You Tube Channel and photographed the event. AWE News was created to report on people and organizations doing “Awesome” such as honoring veterans. Previously AWE News has done video stories on other planes of the Commemorative Air Force including the C-47 “That’s All Brother” and the B-29 “Fifi.”

The Commemorative Air Force is a flying museum of over 150 World War II planes with units in many states. Frequently the CAF supplies the planes for vintage air shows.