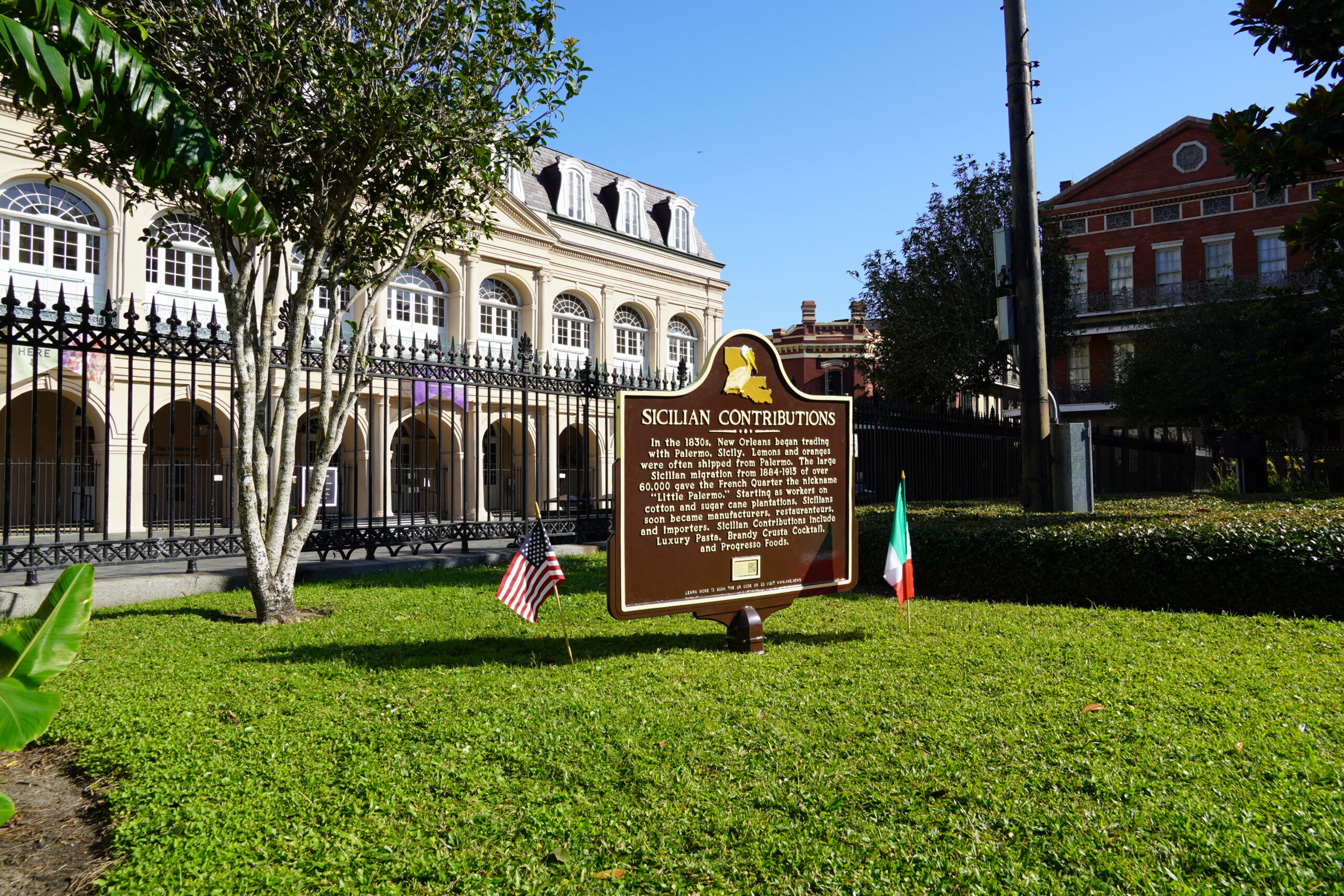 After the Dingley Tariff was passed in 1897 on imported pasta, the Sicilians responded by erected eleven pasta factories in the French Quarter. One was Taormina’s which is now the site of Muriel’s located to the east of the Presbytere.

Although the State of Louisiana reviewed the proposed Sicilian Heritage markers at three levels including two months for the LSU History Department to review during July and August 2019, the City of New Orleans is denying the erection of Sicilian Contribution Marker in Jackson Square.

Honoring the Italian Brigade of April 25-May 1st, 1862. The Confederates left New Orleans upon the arrival of the Union Navy on April 24, 1862. This was designed to prevent the city from being burned down in a battle. The French Quarter had twice been destroyed by major fires in the 1700s.

Jackson Square has been used to honor military for centuries. Orginally named the Plaza d’ Arms by the Spanish and later the site for honoring the Battle of New Orleans. For years, a parade was led by Jordon Noble, who played a drum during the battle of New Orleans. This topic was covered by Council Member Palmer in October 2019.

Mayor Cantrell has proposed a Cultural Fund to award over $3,000,000.00 to Cultural Non-Profits to promote tourism in New Orleans, it is hoped that this change will inspire other city officials to approve the request for locations for Sicilian Heritage markers.

Letter to Editor of The Advocate

Several anniversaries of Sicilian & Italian contributions to New Orleans occur during late April to early Summer.  The residents of New Orleans should be aware of these contributions and the City should leverage them for Cultural Tourism.

The most significant occurred during April 25th to May 1st, 1862, when approximately 280 members of the Italian Brigade were peacekeepers for the transition of New Orleans back to the Union without looting or a devastating fire as happened in Algiers. The French Quarter was devastated by fires in 1788 and 1794.

On April 24, 1862 the Union Navy pushed through River Forts in Buras Louisiana. On April 25th Admiral Farragut asked Mayor Monroe to surrender the city. The Confederate Army had already left for Camp Moore. The Sicilians were viewed as neutral and accepted by Farragut to police the city until the Union Army. During the last week of April 1862, Algiers was being looted and warehouses burned by citizens.   The efforts of the Italian Brigade spared the French Quarter this same fate.

The LSU mascot is the “Fighting Tigers,” taken in honor of Mayor Roberdeau Wheat’s Fighting Tigers from New Orleans in the Civil War.  Wheat was a US Army Major during the Mexican-American War. He was with the freedom fighter General Giuseppe Garibaldi during the 1860-1861 war of Italian Unification. They landed in Marsala Sicily on May 11, 1860 and unified Italy by March 17, 1861.  At that point in time they had 12,000 Sicilians as POWs in Abruzzo, Italy.

Wheat proposed that Garibaldi release 2,000 of the POWs to return with him to New Orleans to fight for Louisiana. Garibaldi agreed and six ships of POWs left for New Orleans. During the war, the Tiger legend was enhanced when the unit ran out of bullets and held a supply bridge by throwing rocks at Union Soldiers, until ammunition arrived.

In October 1861, President Lincoln offered Garibaldi a Brigadier General position. Garibaldi replied with two conditions: make the war about ending slavery and that Garibaldi would be Commanding General.

April 19th is the Feast Day of St. Expeditus. There is a statue of him at Our Lady of Guadalupe Church, built in 1827 for Yellow Fever victims. A mural of St. Expeditus in Palermo portrays people praying at the bed of a sick person.

After the remains of St. Rosalia were carried around Palermo three times, the plague of 1624 ceased, and the Jesuits began advocating for her worldwide. Her Feast Day is July 14th .

Historic markers have been donated with one already erected on state land. Hopefully, the city responds as favorably.   The free New Orleans Insiders Tour App “Little Palermo” works with these markers.

American-Italian Federation of the Southeast