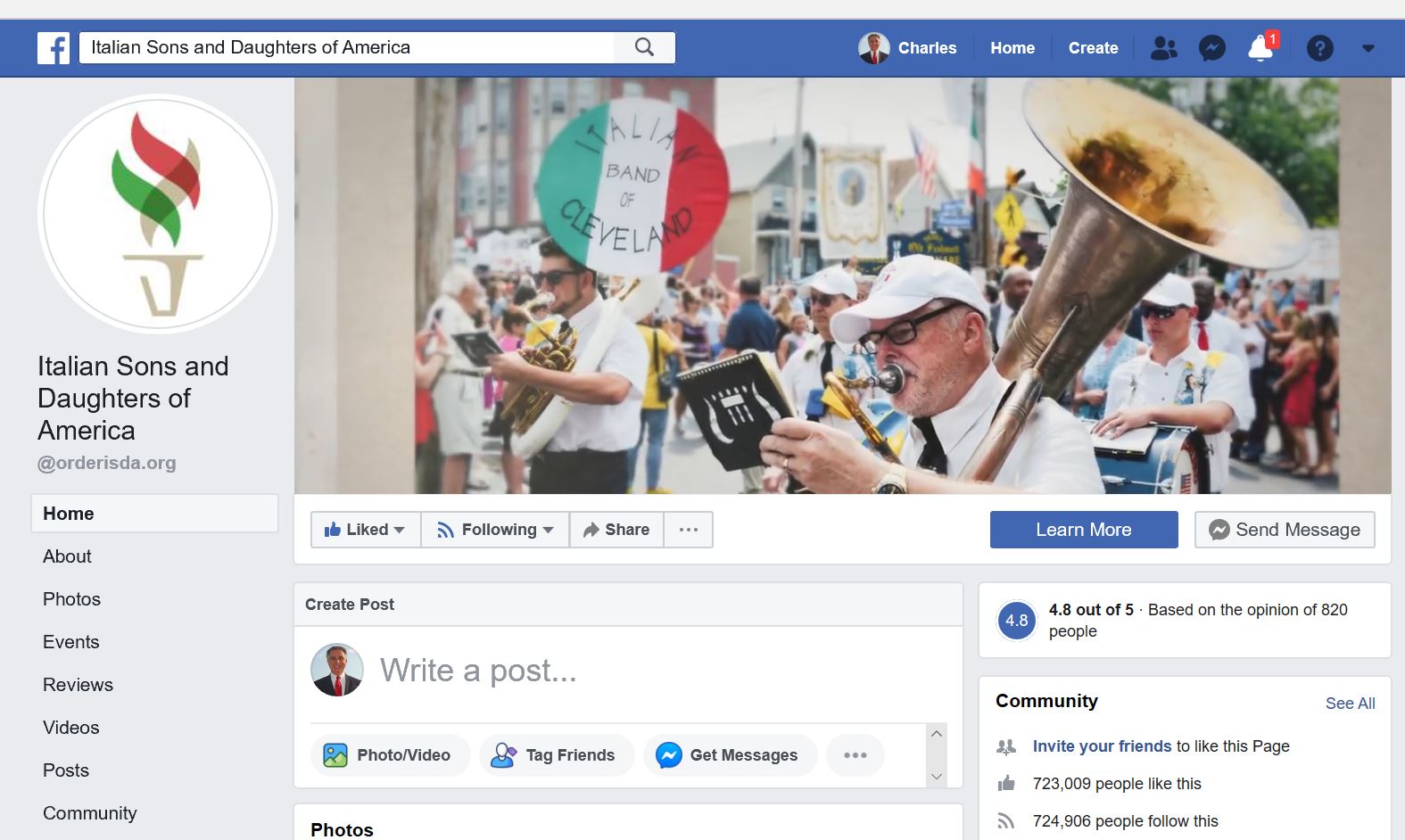 Two lodges of the Italian Sons and Daughters of America have opened in Louisiana. The ISDA started in 1930 and has over 700,000 followers on its Facebook Page. It has kept its strong sense of community alive and thriving to become one of the largest and most financially successful Italian American organizations in the country. It unites Italian Americans across states nationwide to celebrate our culture and preserve the traditions our ancestors brought with them from Italy.

Charles Marsala, President of the American Italian Federation of the Southeast, met with Basil Russo, President of the Italian Sons and Daughters of America at the 2019 National American Italian Federation Convention. Initial start-up funding for the lodges was provided from the Marsala Cultural Fund. Each lodge was opened with twenty-five paid memberships.

At one time Monroe Louisiana had two Italian cultural organizations, but has not had a one for several years. In recent years, conversation has evolved in Southern Louisiana has evolved on the need for a co-ed organization. Marsala plans for the lodges to offer an opportunity for younger Italians to become aware of their heritage and network at the state and national levels.

Basil and Pat Russo are the parents of movie producers Anthony and Joe Russo. The Russo Brothers are best known for producing the Captain America and Marvel Action Movies. A few years back the family started an Italian film competition, which screens the top three finalists at the NIAF Convention and determines the Best Picture of the competition.

The ISDA will host its 2020 convention in Cleveland, Ohio from August 8-12th.

The ISDA promotes Italian Heritage and Culture with numerous programs.

The Northern Louisiana Lodge has been named the St. Rosalia Lodge in honor the patron saint of Palermo. Her feast day is July 14th. Roy Arthur is the Interim President.

In 1624, a plague beset Palermo. During this hardship Saint Rosalia appeared first to a sick woman, then to a hunter, to whom she indicated where her remains were to be found. She ordered him to bring her bones to Palermo and have them carried in procession through the city.

The hunter climbed the mountain and found her bones in the cave as described. He did what she had asked in the apparition. After her remains were carried around the city three times, the plague ceased. After this Saint Rosalia was venerated as the patron saint of Palermo, and a sanctuary was built in the cave where her remains were discovered

The Southern Louisiana Lodge has been named in honor of St. Expedite, whose feast day is April 19th. T.J. Stratanova is the Interim Vice-President.

At first, he was invoked for urgent causes; he has since become the patron of dealers, sailors, students, and examinees.

He is the patron saint against procrastination. He is the saint of emergencies. He loves speed. Those who need a solution to a problem immediately may turn to Saint Expedite. Many turn to him when they are experiencing financial distress, when job hunting, or in relation to legal matters.

“Expeditus” is Latin for a soldier without marching pack, i.e. a soldier with light equipment, this saint may be an anonymous individual known by his profession. He was a Christian martyr, but not much else is known about him. he appears as one of six Roman soldiers said to have been executed at Melitene during the Diocletian persecution.

As a soldier he learned about Christianity. He decided he wanted to convert to Christianity and devote his life to this new faith. As soon as he had made that decision the devil appeared before him in the form of a crow. The devil demanded that he delay his decision to join the Christian faith until the next day.

Expedite refused and firmly stated he would become a Christian today. This is why images show Saint Expedite stepping on a crow. He is killing procrastination. Basically this sends out a powerful message; the saint is crushing tomorrow and replacing it with today.

Marsala added: “The ISDA is a great opportunity for today’s Italians and Sicilians of Louisiana as it implements modern technology for connecting us and promotes the values and traditions of our ancestors. We expect to expand the size of the newly formed lodges which currently have twenty-five members. These lodges can partner or affiliate with the groups in cities that put on the St. Joseph’s Altars and other Italian events.

Our goal is to increase awareness of local events and increase the attendance and volunteers of the events. ISDA gives us the platform to connect and leverage their events to build community in our region. A number of smaller towns have active St. Joseph’s Altar organizations which can benefit from networking and digital publicity.”

The ISDA Lodge template has several officer positions, which allows us to develop a platform to bring about the next generation of Italian leadership.

When you join the community of the Order Italian Sons and Daughter of America, our voice as Americans of Italian descent grows stronger and more united. Your pledge of support for $25.00 includes a one-year membership status, complete with a subscription to our monthly printed edition La Nostra Voce and admittance to our nationwide virtual lodge.