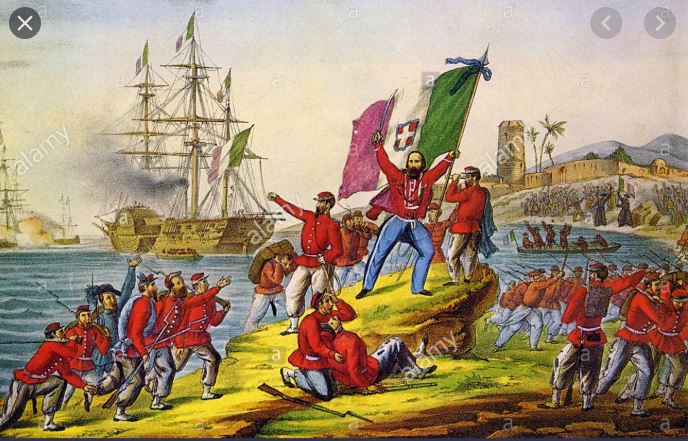 General Giusseppi Garibaldi and Major Roberdeau Wheat landed at Marsala, on the westernmost point of Sicily, on 11 May 1860 to unify Sicily and Italy. Wheat was from New Orleans and would take 1,600 Prisoners’ of War with him when he returned from Sicily in 1861 to fight as Confederates. The was the beginning of Wheat’s raising a group of men who would latter become known as “The Fighting Tiger” and be honored as the mascot of LSU. 160 years later, the Sicilian influence is felt through Louisiana in food, festivals, commerce, and politics.

In celebration of the day and event, Jefferson Parish now recognizes May 11th as “Alligator Marsala Day.”

The Expedition of the Thousand (Italian: Spedizione dei Mille) was an event of the Italian Risorgimento that took place in 1860. A corps of volunteers led by Giuseppe Garibaldi sailed from Quarto, near Genoa (now Quarto dei Mille) and landed in Marsala, Sicily, in order to conquer the Kingdom of the Two Sicilies, ruled by the House of Bourbon-Two Sicilies.

The project was an ambitious and risky venture aiming to conquer, with a thousand men, a kingdom with a larger regular army and a more powerful navy. The expedition was a success and concluded with a plebiscite that brought Naples and Sicily into the Kingdom of Sardinia, the last territorial conquest before the creation of the Kingdom of Italy on 17 March 1861.

The sea venture was the only desired action that was jointly decided by the “four fathers of the nation” Giuseppe Mazzini, Giuseppe Garibaldi, Victor Emmanuel II, and Camillo Cavour, pursuing divergent goals. However, the Expedition was instigated by Francesco Crispi, who utilized his political influence to bolster the Italian unification project.

The various groups participated in the expedition for a variety of reasons: for Garibaldi, it was to achieve a united Italy; to the Sicilian bourgeoisie, an independent Sicily as part of the kingdom of Italy, and for common people, land distribution and the end of oppression.

In 2019, Michael Santo of New York led the effort for an official apology by the Mayor of New Orleans on the 1891 Lynching of Italians which involved the then Mayor Shakspeare. On the night before the event, which also included a Proclamation of Recognition by Mayor Cantrell of Sicilian contributions to New Orleans, a reception was held for the out of town guests. Alligator Marsala premiered on the menu and a Proclamation was issued by Jefferson Parish recognizing the fusion of Sicilian and Cajun in Louisiana.

The 1,089 volunteers were poorly armed with dated muskets and were dressed in a minimalist uniform—consisting of a red shirt and grey trousers.

During the night of 5 May, a small group led by Nino Bixio “seized” two steamships in Genoa from the Rubattino shipping company (which the ships were actually secretly granted by the company, but done in such approach to prevent taking any responsibility by plausible deniability) in order to transport the volunteers to Sicily. They took the two ships, which they had renamed Il Piemonte and Il Lombardo, to the nearby rocks at Quarto dei Mille, Genoa, where the volunteers (including Francesco Crispi’s wife, Rosalia) embarked for Sicily.[8]

The ships were then accompanied by the British Royal Navy which consisted of HMS Hannibal followed by the gunboats Argus and Intrepid under the command of Admiral Rodney Mundy. They landed at Marsala, on the westernmost point of Sicily, on 11 May. With British ships present in the harbour thus deterred the Bourbon ships from interfering. The Lombardo was attacked and sunk only after the disembarkation had been completed, while the Piemonte was captured. The landing had been preceded by the arrival of Francesco Crispi and others, who had the task of gaining the support of the locals for the volunteers.

On 14 May, at Salemi, Garibaldi announced that he was assuming dictatorship over Sicily in the name of King Victor Emmanuel II of Sardinia.

With 12,000 POWs, Garibaldi opted to sent up to 2,000 to New Orleans rather than feed them or release them.

The Zouave Uniform of Italy 1860 was seen on the battlefields of the Civil War.