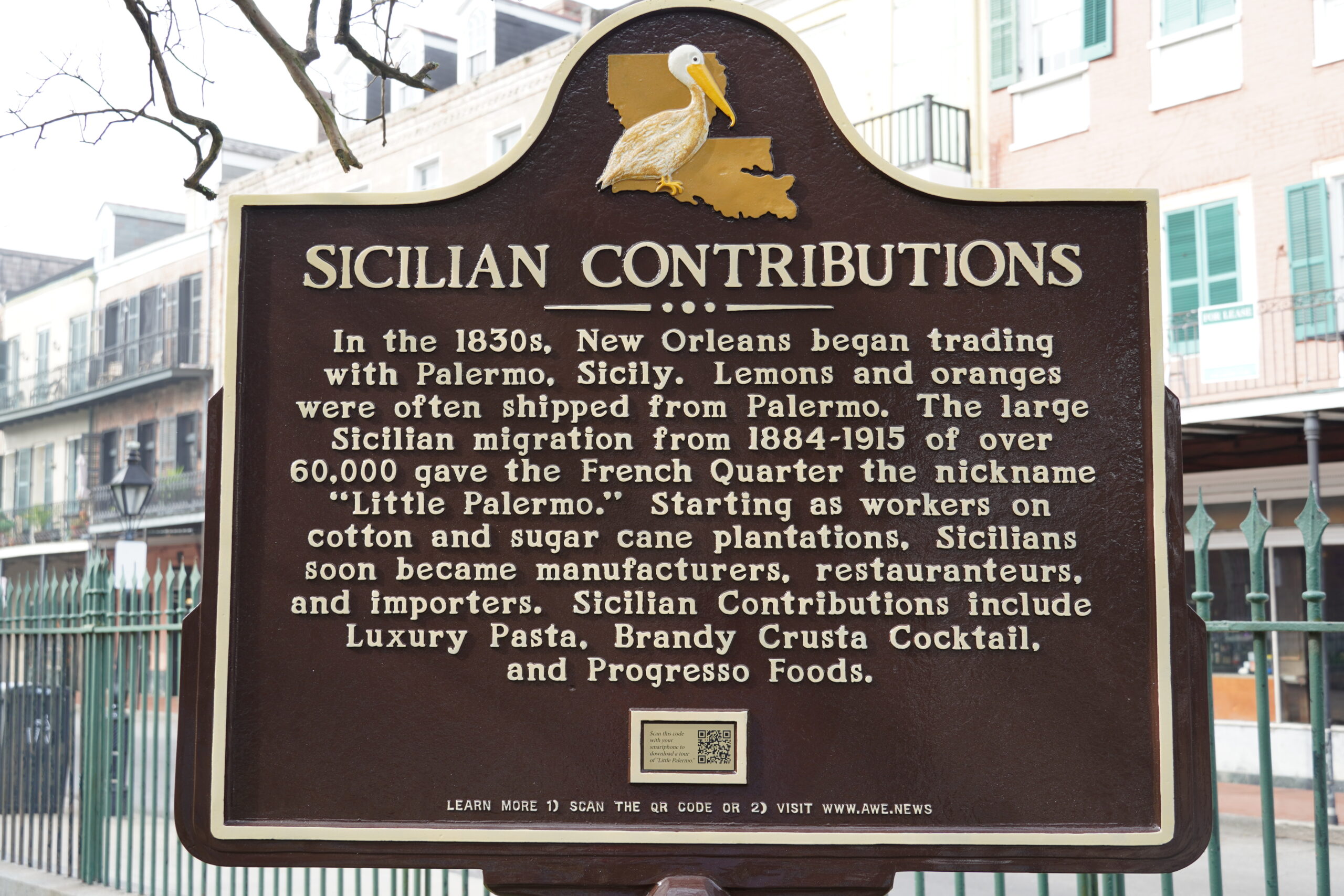 Two Heritage Markers have been donated for the French Quarter of New Orleans by the Marsala Cultural Fund. There is text on both sides of each marker with a QR Code to a free tour guide of forty Italian & Sicilian points of interest in the French Quarter. Additional markers are being designed and will be sent in 2020 to the required state agencies and LSU History Department for approval.

The first marker of Sicilian Music contributions has been erected at the state managed Jazz Museum on the corner of Decatur and Esplanade. A dedication was held on the morning of January 25 prior to the annual Sports Gala hosted by the American Italian Cultural Center.

The second marker tells two stories Italian and Sicilian involvement in the Civil War and Economic Contributions during 1880s to the 1960s.

The Italian Brigade of New Orleans in 1862 patrolled the French Quarter for a safe transition back to the Union. During April 24th to May 1st of 1862, the Mayor of New Orleans asked the Italian Militia to patrol the city for an orderly transfer of control back to the Union Army. The Union Navy arrived on April 25th, but the Union Army would not arrive until May 1, 1862. When the Union Navy’s gunboats arrive, the Confederate Army decided to abandon the city rather than see it destroyed in a battle.

The Italian militia was led by Agnello Rafaele. Following the war Rafaele started a stevedore company on the Mississippi River unloading ships. The presence of Italians and Sicilians was banned on the docks of New Orleans in 1891. At this point many moved to Kenner, Grande Isle, and Independence Louisiana.

Looting and fires happened in Algiers during that 8-day period in 1862 as the residents did not want the Union Army to benefit by seizing the cotton warehouses.

The French Quarter had already been devastated by two major fires in the 18th century. The fire of 1794 burned 894 buildings. The Great New Orleans Fire of 1788 destroyed 856 of the 1,100 structures in on March 21, 1788, spanning the south central Vieux Carre from Burgundy to Chartres Street, almost to the Mississippi River front buildings. An additional 212 buildings were destroyed in a citywide on December 8, 1794.

Thus the 280 members of the Italian Brigade were approved by both the Mayor of New Orleans and the Union Admiral as a ‘neutral party’ during the Civil War as most had just arrived in America with no ties to either side. For eight days they patrol the streets of the French Quarter until the Union Army arrived to protect the facilities.

The LSU Tigers and The Sicilian Zouaves of 1860

Louisiana State University ranks at the top of college polls for fan support. The Tiger mascot is an integral part of their fans’ enthusiasm. It’s origins can be traced to 1,600 Sicilian prisoners of war in Abruzzo, who were shipped in 1861 New Orleans to fight under Major Wheat. The state approved marker gives a description of this connection.

Roberdeau Wheat was a lieutenant during the 1846-1848 Mexican-American War. During 1860-1861, he was a major under General Giuseppe Garibaldi in the Italian Unification War. On May 10, 1860 Garibaldi and Wheat landed with 1,000 men in Marsala Sicily. At the time, the Kingdom of the Two Sicilies included Naples and had Spanish influence. Many Sicilians were quick to join with Garabaldi, with other fighting and becoming Prisoners of War.

On May 11, 1860 Giuseppe Garibaldi landed in Marsala to begin the unification of Italy as France, Spain, and Austria were seeking to conquer regions of Italy. Garibaldi believed a unified Italy was needed to stop the taking of land from the five Italian kingdoms.

From 1884-1915 a large Sicilian immigration of over 60,000 came to New Orleans after having been recruited to work on sugar cane plantations. Many realized that in just three years, they could save enough to buy a building to open a grocery store on the bottom and live above the store.

By 1910, half of the grocery stores in Louisiana were owned by Italians from Sicily. Soon they ventured into other businesses.

Conceptual of the proposed location for erecting the second marker. In the center of the photo is a red brick building that was once the Taormina Pasta Factory and is now Muriel’s restaurant.

On March 7th 2020, Charles Marsala President of the American Italian Federation of the Southeast was invited to make a one hour presentation at the National Park Service on Decatur Street on the Sicilian Migration. The presentation consisting of sixty slides was recorded.

While the State of Louisiana has a published process, the City of New Orleans does not. Proposals are due to the State Department of Tourism in early May and must contain supporting research. Once reviewed by the Department of Tourism the packets are sent to LSU History Department. After approval by LSU History for accuracy, the packets are sent to a state committee for political approval.

In New Orleans, the decision is up to NORD or New Orleans Recreation Department to allow the markers to be erected. A presentation and request was made in September 2019 to New Orleans City Council member Kristen Palmer and the Quality of Life Committee.

In December 2019, Mayor Cantrell announced funding with approximately $3 Million annually non-profits promoting Culturing Tourism. In March, her Chief of Staff presented to the City Council and acknowledged the Italian efforts.

Other cultural markers have been erected around New Orleans.

The markers erected by Mitch Landrieu have been challenged for their omissions. During the Muslim Caliphates of the 8th, 9th, and 10th African slavery expanded. Slavery was part of the Wolof people since their earliest known history. In the pre-colonial era, slaves were either born or acquired through purchase or capture.

With the Arab conquests of West Africa in last centuries of the 1st millennium CE, one theory states that the Wolof people were forced to move into north and east Senegal where over time villages developed into autonomous states such as Baol, Kayor, Saloum, Dimar, Walo and Sine the overall ruling state being that of Jolof who came together voluntarily to form the Jolof Empire.

A major source of slaves sold by Wolof elites, and of Wolof slaves, were the war captives taken during the wars between the ethnic groups in West Africa. Slave raiding, just to obtain slaves for sale, were another significant source of slaves in Wolof territories.

No mention in the New Orleans markers is given to the Slave Trader, Human Trafficker, and Pirate Jean Lafitte.