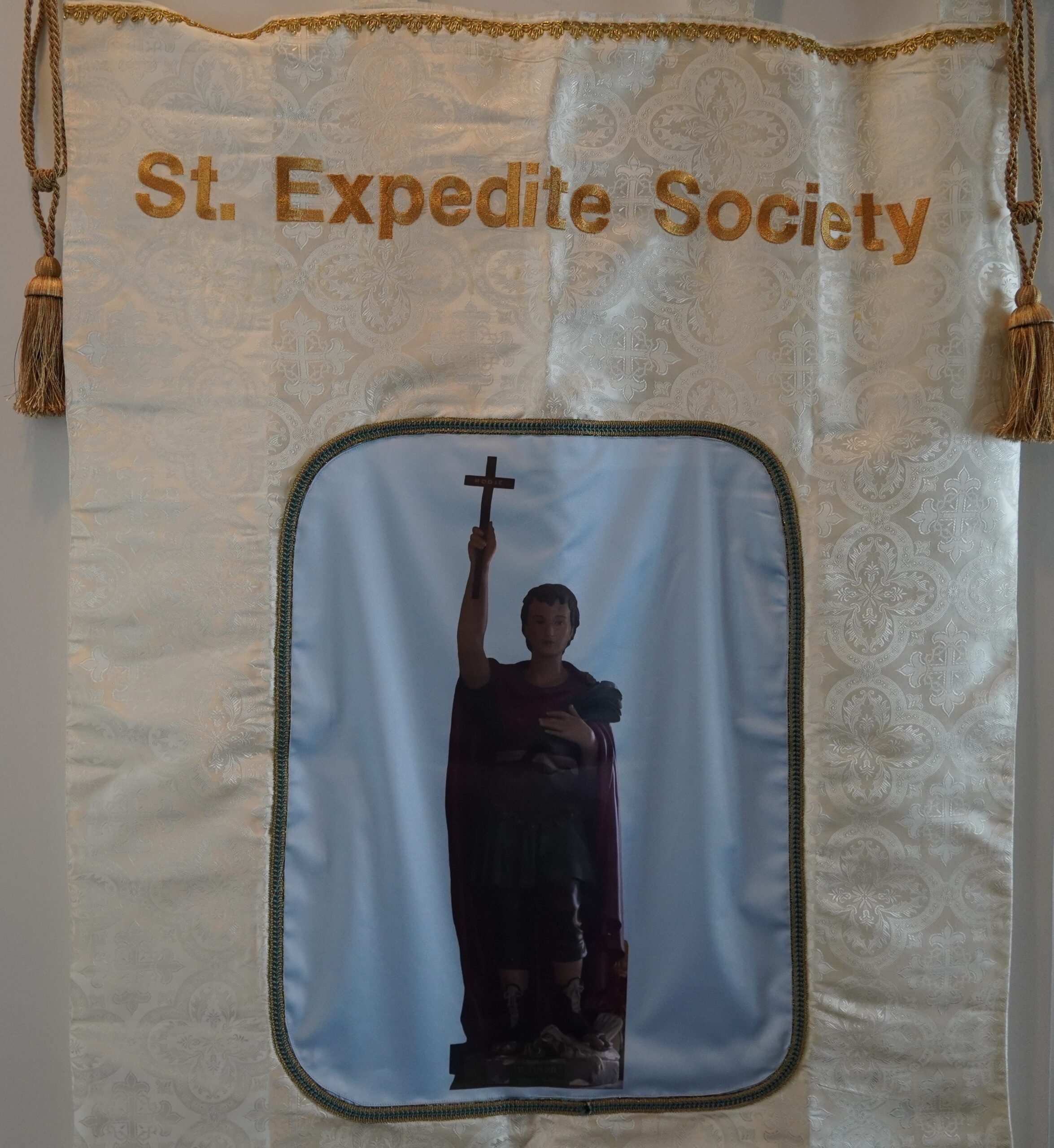 St. Expedito’s Role in South Louisiana Catholicism, in New Orleans and in the Italian-American Community near Independence, Louisiana

“As the supplicants of Our Lady of Guadalupe Church in New Orleans eagerly opened the package containing the new statue that was to grace the sacristy, a beautiful image of Our Lady, they were surprised to note that a second package of similar size had come to the same address. Puzzled, they read the bold letters EXPEDITE printed clearly on the outside. Opening the wrappings, they found a Roman soldier in resolute pose, both helmet- and sword- less, holding a palm branch in his left hand and raising high in his right hand a cross stating “hodie.” Quickly-the saint’s name allowed no hesitation-the soldier’s image was ensconced in the right hand corner, near the church’s entrance. In New Orleans, the saint’s popularity rose quickly, a patron for those needing help right away; concerns both sublime and ridiculous fell under Expedite’s providence. Those praying for the end of warfare, those seeking a speedy redress in legal and personal disputes, those seeking immediate employment, those striving to break habits of procrastination-all wondered how they had done without St. Expedite.

This may be an interesting anecdote, but its authenticity is far from certain, although many New Orleanians who believe in Expedite’s power claim it to be true. In looking for St. Expedite’s origins, one finds a rich morass of history and culture. New Orleans claims the saint as its own-both Catholic and voodoo followers-and remains unperturbed by its possible nascence in New Orleans. However, it is definitely not true that New Orleans has the only statue in the world as some sources claim or even the only statue in America. In fact, a number of churches in the United States as well as in Spain, France, Italy, Germany, and other countries contain the noted foot soldier, often titled Expedito; and opinion is varied as far as the authenticity of the saint.1 In Louisiana studies, St. Expedite is an important figure that illuminates how a particular culture may claim a saint for its own. In New Orleans, St. Expedite’s unofficial and questionable status came to be a part of its appeal as voodoo embraced the figure. In contrast, the Italian community in rural southeastern Louisiana celebrated St. Expedito with public demonstrations and feasting.

My questions at the church and its adjacent gift shop went largely unanswered. The woman working at the gift shop claimed to know nothing of St. Expedite, although prayer cards, small statues, and medals all bore the image of the saint, and offered more information about St. Jude, to whom the shrine is officially dedicated. She not only refused to verify St. Expedite’s authenticity but declined to speak about the saint at all.

My Louisiana quest for the saint seemed to be at a dead end. However, driving on the back roads one day near Independence, Louisiana, home to a significant population of Sicilian and Italian descent, I came upon a small chapel marked by the title St. Expedito. Could this be the same figure? Unable to enter the locked door, I carefully pushed ajar a heavy window and peered into the quaint chapel. Near the altar, Expedito stands tall, crow underfoot and cross in hand, with all the standard features. A young Roman centurion, as mentioned earlier, has taken off his helmet and sword and instead holds aloft the cross stating “Hodie,” today, in Latin. One recurrent interpretation is that Expedito wanted an immediate end to war, thus helmet and sword are laid aside, replaced by the palm branch. The figure appears stoic, calm, and immobile; but his stance is belied by a second banner emblazoned with “Cras, Cras,” emanating from the throat of a crow being stomped under the saint’s foot. Why must the otherwise peaceable saint torment this prostate crow? Here Expedito shows his love of wordplay beyond his apt appellation. In Latin and Sicilian, the crow says “cras, cras” which means tomorrow; thus the crow is always croaking about the future. Stomping the crow, Expedite destroys the tendency to procrastinate (“St. Expedite,” http://www.armeniapedia.org).

There was no mistaking this figure-so remarkably like his New Orleans’ brother. Perhaps I would find a willing supplicant here in the largely Catholic community, especially since the whole chapel was proudly marked as St. Expedito’s. Although the pavilion beside the building seemed somewhat in disrepair, the chapel remained intact, my limited view inside yielding a neat, well organized room. I drove to the main Catholic Church office in Independence to see if I could get any information. An elderly man stopped me before I entered, sensing I needed help, and told me the name of the family who maintained the chapel-and little else. The church office had no more information for me about the chapel but did inform me that a young man had just chosen (this was 2005) St. Expedito as his patron saint.

Driving back toward the chapel, I noticed a well-kept wood frame house across the street. I knocked on the door, to be greeted by Mrs. Carmella Marciano, a vibrant woman in her seventies, who happily acknowledged my interest in St. Expedito. Mrs. Marciano, whose father built the chapel in the late 1940s because of St. Expedito’s help in a personal circumstance, told me of the celebrations that used to be held every second Sunday in June in honor of the saint (Marciano 2005). Food, beer, and bands converged with friends to offer homage.”

Most powerful prayer to St Expeditus. My Saint Expeditus of urgent and just causes, please intercede for me with Our Lord Jesus Christ. … Bring me back to the state of peace and tranquillity, my Saint Expeditus. I will be grateful to you for the rest of my life and I will speak your name to all those who have faith.