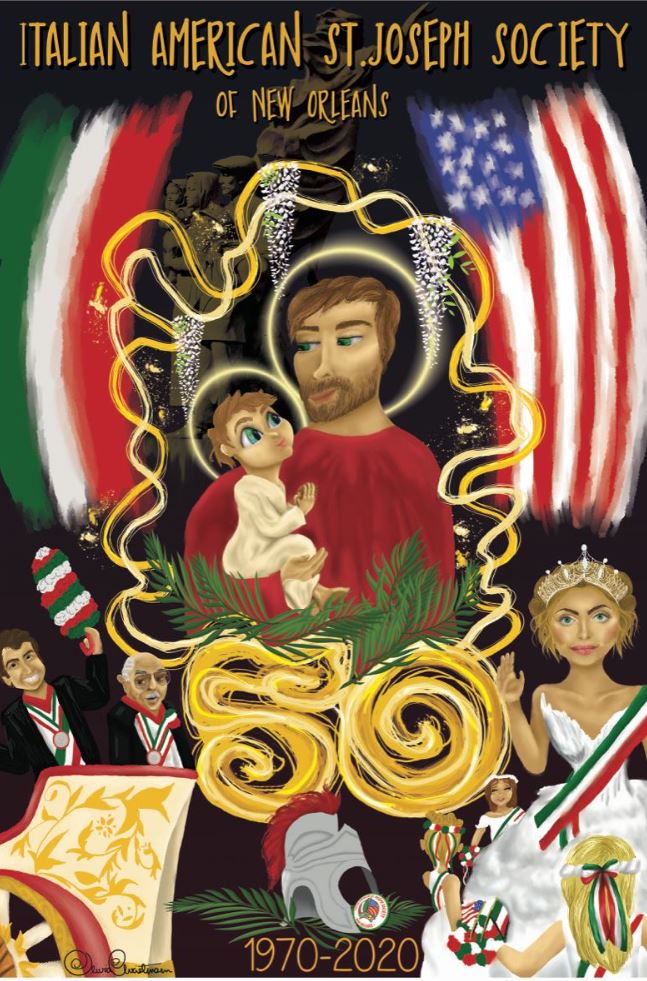 The IASJS St Joseph’s Day poster celebrating the 50th Anniversary of the Parade! This piece is artfully crafted by Miss Olivia Angeline Christensen, 19. Don’t miss out on this opportunity to own a piece of history celebrating 50 years of honoring St Joseph and Pride In Our Italian Heritage!

Olivia’s first year as an IASJS Parade Maid was at 4 years old (2005). She currently is a freshmen at NC State University in Raleigh, North Carolina studying Design and International Business. The love of art, her family heritage and tradition inspired her to design the 50th Anniversary Poster for the Italian American St. Joseph Society.

Grand Marshal for the 2020 50th Anniversary Parade, Michael Badalucco, a Brooklyn native, got his start in the entertainment industry at a very young age, going to work with his father Giuseppe, a Sicilian-born immigrant, who worked as a carpenter on movie sets.

In 1963, during the filming of Fail Safe starring Henry Fonda, a photo of a young boy was needed. Eight-year old Badalucco posed for the picture, and thus began his acting career. He went on to Xaverian H.S. and got his first taste of theatre there in musicals like A Funny Thing Happened On The Way To The Forum and dramas like Shaw’s St. Joan. He began his formal acting studies at the State University of New York at New Paltz. It was there that he cut his teeth on stage, performing in over 20 plays. He graduated with a B.A. in Theatre Arts in 1976.

In 2003, his alma mater conferred upon him an honorary degree of Doctor of Fine Arts, citing his “extraordinary success while never losing perspective on what is important in life.” His first speaking role was in the feature film Raging Bull, directed by Martin Scorsese, which led to additional roles in movies such as Broadway Danny Rose, directed by Woody Allen.

Throughout the 1990’s, Badalucco appeared in a series of memorable supporting roles in such acclaimed films as Miller’s Crossing, Sleepless in Seattle, Jungle Fever, The Professional, and Mac. His performance in the romantic comedy One Fine Day,prompted star Michelle Pfeiffer to recommend Badalucco to her husband,David E. Kelley, for a role in his ABC television series The Practice. Not only did Badalucco get the part, but his performance as Jimmy Berluti would ultimately serve as his breakout role. In 1999 he received the Emmy Award for Outstanding Supporting Actor in a Drama Series. Next, on the big screen, he portrayed serial killer David Berkowitz in Spike Lee’s Summer of Sam.

He then stepped into the shoes of notorious gangster George “Baby Face” Nelson for the throwback Coen Brothers comedy, O Brother, Where Art Thou? and appeared in their subsequent film, The Man Who Wasn’t There.

In addition to Badalucco’s love of acting, he has been involved with a number of charitable organizations which include The Jimmy Fund and The Little Sisters of the Poor. In 2003, Habitat for Humanity of Los Angeles presented him with the Building Hope Award. He received the Heart of the City Award from Heartshare Human Services of New York in 2005. In 2013, he was inducted into the Diocese of Brooklyn Hall of Fame. Mr. Badalucco is privileged to support Italian-American causes through his work with the National Italian American Foundation and Arba Sicula, an organization which preserves, studies, and promotes the language and culture of Sicily.

Anabella Odillie Imbornone was born in Metairie, LA on July 25, 2001 to Daniel and Sylvia Imbornone. Her father Daniel C. Imbornone is board member and treasurer for our organization and her uncle Charles A. Imbornone is also a board member. Her brother, Antonio is a member as well as her grandfather Charles J. Imbornone and all of her uncles and cousins.

Anabella has participated in our organization since she was 4 years old, making this her 15th consecutive year as a Maid. She graduated from St. Martin’s High School in May 2019 with academic honors including earning the award of Commended Scholar for the National Merit Scholarship Corporation. She was a member of the National Honor Society and earned athletic awards from both St. Martin’s and the Louisiana High School Athletic Association. Anabella lettered in cross country, indoor track and track and field her four years of high school.

She has been a volunteer for organizations like Race for the Cure, Nola BlueDoo Run, Habitat for Humanity, Luna Fete Arts Council of New Orleans, Terraces on Tulane Nursing Home, Homer-A-Plessy Community School and Kehoe France School during her high school career. Anabella was awarded three academic scholarships from Auburn University in Auburn, AL where she is currently majoring in early childhood education. She is a member of Pi Beta Phi sorority where she holds three different director and chairwoman positions.

She spends her free time volunteering for the Boys and Girls Club of the cities of Auburn and Opelika, AL, as well as Children’s Miracle Network Hospital in Columbus, GA. She also volunteered the past two years with our organization at the St Jude Community Center to help provide food for the less fortunate, a tradition she hopes to continue. Anabella is humbled and honored to be representing her family, her heritage and our organization in our 50th anniversary as our 2020 Queen.