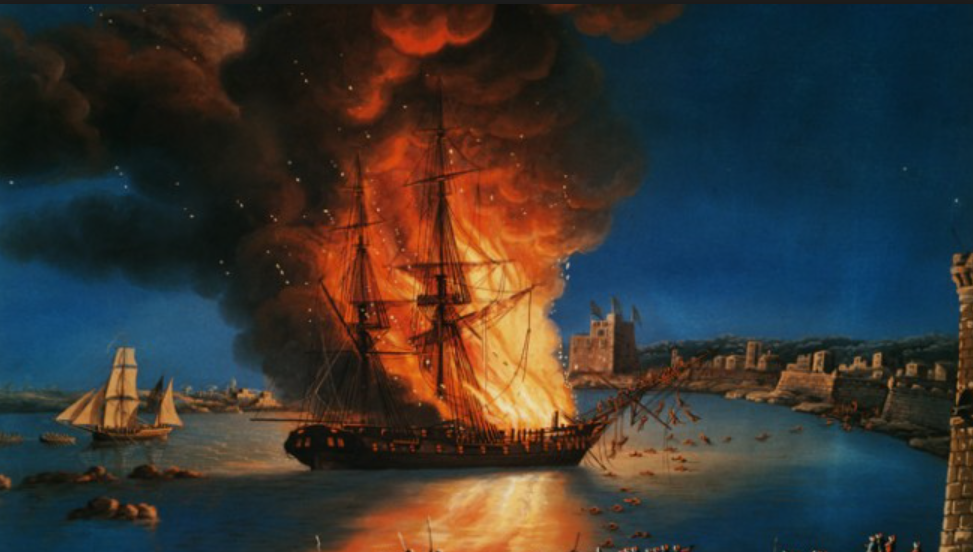 When you here the words in the Marine Corps Hymn : “To the Shores of Tripoli,” walk on Decatur Street in New Orleans, or visit any city in America named “Decatur.” Do you wonder the history of those words or the reason for the naming of the street Decatur?

When the First Barbary Coast War started in 1804, the Kingdom of the Two Sicilies was its own country compromised of both the Island of Siciliy and the lower half of the Italian Peninsula.

The Pirates of the Barbary Coast Countries of Northern Africa, (Lybia, Morroco, Algeria, and Tunsia), had been taking slaves and stealing ships form Europeans Countries for centuries.

President Thomas Jefferson had decided to quit paying the tribute to the pirates. When American ships and sailors were captured, Jefferson sent the USS Philidelphia to the area. The Philadelphia ran aground and was captured. A plan involving Lt. Stephen Decatur was to send a ship from Syracuse Sicily piloted by Salvadore Catalano and three other Sicilians into Tripoli with 75 men to blow up the Philadelphia.

Sicily and its neighboring islands had been raided frequently. Estimates are over 1,000,000 Europeans were captured by the Barbary Pirates between the years 1,450AD and 1,830AD and sold into African and later Arabian Slavery.

One confirmed raid is September 8, 1762 when pirates from Tunisia took 70 Ustician as slaves back to Tunsia. New Orleans and San Francisco both have large populations from Ustica. Today in Louisiana move than 30,000 claim Ustician heritage.

The history of the Barbary Coast Pirates can be traced to the Almohad Caliphate which lasted from 1147AD to 1269AD.

Before the Treaty of Paris, which formalized the United States’ independence from Great Britain, U.S. shipping was protected by France during the revolutionary years under the Treaty of Alliance (1778–83). Although the treaty does not mention the Barbary States in name, it refers to common enemies between both the U.S. and France. As such, piracy against U.S. shipping only began to occur after the end of the American Revolution, when the U.S. government lost its protection under the Treaty of Alliance.

This lapse of protection by a European power led to the first American merchant ship being seized after the Treaty of Paris. On 11 October 1784, Moroccan pirates seized the brigantine Betsey. The Spanish government negotiated the freedom of the captured ship and crew; however, Spain advised the United States to offer tribute to prevent further attacks against merchant ships. The U.S. Minister to France, Thomas Jefferson, decided to send envoys to Morocco and Algeria to try to purchase treaties and the freedom of the captured sailors held by Algeria. Morocco was the first Barbary Coast State to sign a treaty with the U.S., on 23 June 1786. This treaty formally ended all Moroccan piracy against American shipping interests. Specifically, article six of the treaty states that if any Americans captured by Moroccans or other Barbary Coast States docked at a Moroccan city, they would be set free and come under the protection of the Moroccan State.

American diplomatic action with Algeria, the other major Barbary Coast State, was much less productive than with Morocco. Algeria began piracy against the U.S. on 25 July 1785 with the capture of the schooner Maria, and Dauphin a week later. All four Barbary Coast states demanded $660,000 each. However, the envoys were given only an allocated budget of $40,000 to achieve peace. Diplomatic talks to reach a reasonable sum for tribute or for the ransom of the captured sailors struggled to make any headway. The crews of Maria and Dauphin remained enslaved for over a decade, and soon were joined by crews of other ships captured by the Barbary States.

Captain William Bainbridge paying tribute to the Dey of Algiers, 1800

In March 1786, Thomas Jefferson and John Adams went to London to negotiate with Tripoli’s envoy, ambassador Sidi Haji Abdrahaman (or Sidi Haji Abdul Rahman Adja). When they enquired “concerning the ground of the pretensions to make war upon nations who had done them no injury”, the ambassador replied:

It was written in their Koran, (that all nations which had not acknowledged the Prophet were sinners, whom it was the right and duty of the faithful to plunder and enslave; and that every mussulman who was slain in this warfare was sure to go to paradise). He said, also, that the man who was the first to board a vessel had one slave over and above his share, and that when they sprang to the deck of an enemy’s ship, every sailor held a dagger in each hand and a third in his mouth; which usually struck such terror into the foe that they cried out for quarter at once.

While people are celebrate New Orleans Mardi Gras in the French Quarter on Decatur Street in 2020. We should remember that 216 years ago, four Sicilians and 75 US Marines and Navy were fighting America’s first international battle.